My family is quite kooky and delightfully ancient.

We know the ins and outs of our family history for a variety of reasons, most of which revolve around hoarding Victorians and my great-grandmother’s life quest to hunt out every detail she could about her family’s past–which drove her into the records of the Church of Latter Day Saints and out to a series of tiny churches and cemeteries all over Europe and Central America.

The Saga of Ole Worm

Though there are literally hundreds of tales, and thousands of antique photographs (and yes, one day– these too will be archived and annotated if for no other reasons than that they should be); the bit of family history that has always seemed most apropos for me to discuss is our relation to one of the first archaeologists, the noted 17th century antiquarian Ole Worm (or Olaus Wormius).

In among his various life triumphs like deciphering the Norse runic alphabet, being the royal physician to the much beloved King Christian IV of Denmark, possessing one of the most extensive Cabinet of Curiosities of his time, and eventually having a Danish postage stamp and an HP Lovecraft character in his honor–he was involved with the first of the golden horns of Gallehus.

As you can tell from that litany, he’s a bit cool. And I rather think if he hadn’t been a long-distant family member, my mother would never have let me pursue archaeology as a career. She justifies it all now as ‘keeping it in the family.’ But his are big, daunting shoes that I don’t think I ought to try to fill.

The replicas of the Golden Horns of Gallehus at the Danish National Museum.

But back to our tale of artifact replication and the proposed techno-art project it involves:

The first golden horn was reputedly found by a peasant girl near the village of Gallehus in Denmark, prompting further excavation and study by the King’s right hand man and collector of antiquities and oddities– yep, you guessed it– our hero Ole Worm.

After much study, translation, and publication on the subject by Ole Worm–the horn, and another similar shorter horn found nearby almost a century later, passed into the king’s museum collection. Where they lived a quiet life on a shelf until they were stolen by an itinerant goldsmith and melted down in 1803. Luckily casts of the original horns had been made for a Cardinal in Rome, as the papacy had specifically approved the initial research on the Viking artifacts of Gallehus and apparently eventually wanted their own copy. Unluckily, those original casts were lost in transit, when the ship carrying them sank.

Utilizing Ole Worm’s drawings of the horns, replicas were subsequently made, and several copies from these replicas were cast. These copies are made from a variety of materials and were sent out to several Danish and international museums.

One of Ole Worm’s published drawings of the Gallehus horns.

The British Museum reproductions of the Gallehus horns are electrotype copies of the replica and at my last visit, were kept in a central case in the antiquarian rooms of the museum. Since their arrival in London, this set of horns has led a quiet life.

The other replicas of the replicas have been less fortunate. And in the past decade, both the replicas from Moesgaard Museum and the Kongernes Jelling Museum were stolen from their cases, but promptly recovered by authorities.

In the 1970s, my grandmother Nanook, the ever-creative and fabulous Lynn Zalot, decided we apparently ought to have our own version of the Gallehus horn of Ole Worm. And so she wrote the museum authorities and requested photographs of the artifact. Eventually, she was sent a single shot. And from that image, she crafted her own interpretation of the horn. 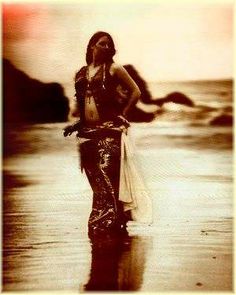 My grandmother Lynn Zalot in one of the promotional belly dancing series for her Middle Eastern Dance Magazine: Habibi…another something-something that ought to be archived. We have boxes and boxes of the best of 1960s and 1970s bellydancing stored up, in addition to the anthropological articles of the magazine itself.

Nanook’s replica of the Galleheus horn–shorter, stouter, and made of clay.

And now, I’d like to try again. Going back to the original etchings, I’d like to digitally model and 3D print the first golden horn of Gallehus–displaying it in our Cabinet of Curiosities alongside my grandmother’s replica and the personal family tale that tacks onto this ancient archaeological legend of replication.